Arcadia Earth Mix Arid Substrate 10 Litres
EarthMix-Arid has been formulated by experts to suit the Wild-Like needs of animals from the worlds more Arid Terrain. These ecosystems include those referred to as being; Arid, Scrubland, Savanah and Emergent Desert.

EarthMix-Arid uses Arcadia's original EarthMix as a base with an added 30% Certified Organic Scottish Volcanic rock dust. The Volcanic rock is not only totally natural and mineral positive but is also sourced from an ethical Scottish source.

EarthMix-Arid will not only allow the keeper to grow plants that are adapted to these Arid regions but it will also help to provide Nutritional, Mental and Physical enrichment for animals through natural digging and food collection.

EarthMix and EarthMix-Arid are the ULTIMATE choice for the forward thinking Bio-Active keeper. 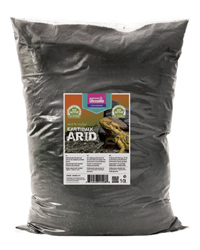 Testimonials
"Many thanks for the quick delivery on my product, your service is fantastic I will be using you again in the near future, I will also be telling my friends about you, many thanks."