Based on extensive fieldwork by the author extending over 25 years, observations from colleagues, and the literature,Natural History of Neotropical Treeboas (Genus Corallus) summarises, often in great detail, our current knowledge of treeboa habitats, activity, diet, foraging strategies, defensive behaviors, predators, reproduction, population characteristics, and the shared history of humans and treeboas and the impact humans have had on treeboa natural history. 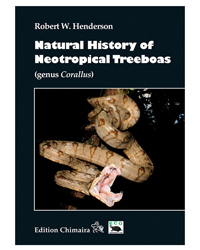 Testimonials
"Hi, just to say thank you for the prompt delivery of my goods ordered on Tuesday all arrived in perfect condition."